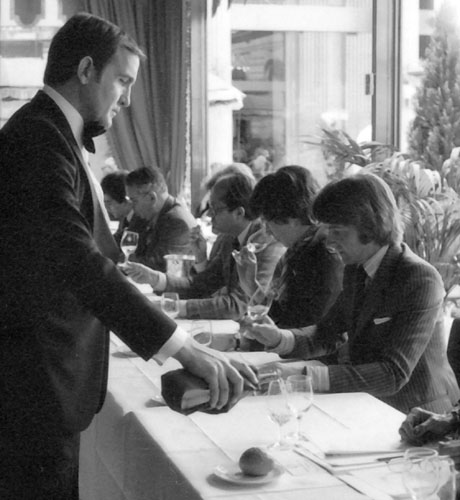 Old meets new at the Judgement of Paris 40 years ago.

On May 24, 1976, Steven Spurrier,  a British wine merchant organized a blind tasting of some classic French wines against some of Napa Valley’s emerging wineries.  The results shocked the world and some say put Napa on the map as a legitimate wine region.

The judging panel only included two non-French judges and there is still debate if their votes were ever counted or not. Regardless, Napa newcomer Chateau Montelena won with a Chardonnay and Napa’s Stag’s Leap Vineyards won the competition with a 100 percent Cabernet Sauvignon. The California wines emerged soundly victorious against the French counterparts.

The very popular movie Bottle Shock is based upon Judgement of Paris and is a must see. This movie is very entertaining and really paints a good picture about the early history of Napa.

(Hint: come watch the movie with us during our Anniversary week)

Traditionally there have been two classical styles of wine: Old World and New World.

Old world referrers primarily to Europe but also includes other regions in the Mediterranean basin, North Africa and Near East.

New World Wines are everything else, in particular, Argentina, Australia, Chile, New Zealand, South Africa and the United States.

New World Wines tend to be more fruit driven with more ripe flavors and higher alcohol content. They are made using the latest research, technology and market research to please the consumer. They are ready to enjoy and tend to be served without food.

Old world wines are steeped in tradition and the methods used to produce the wine are often mandated by law.  These wines are often more rustic, earth, under ripe, often ages well and are primarily served to complement a meal.

But times are changing;

I see this phenomenon all over the place; in movies, TV shows, advertisements, practices, methods, ways and means.

It is great to see this blending of old and new; each learning from the other and working together to form a better union. Right here in our county we have young winemakers using traditional processes, and older winemakers who have immigrated to the US using modern technology.  Each brings unique strengths to the industry making things just a little better for all.