The Cost of Wine 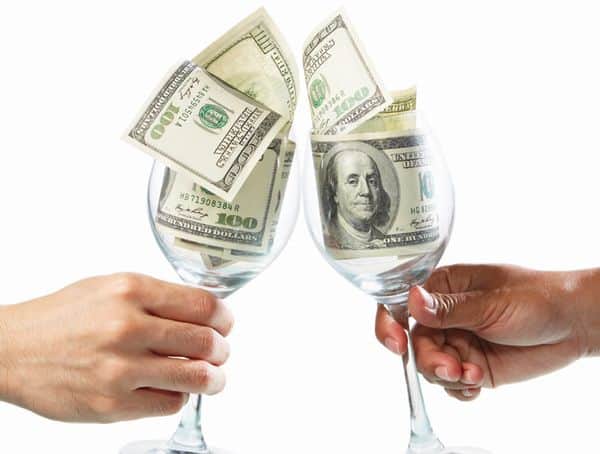 Between the years of 1920 to 1033, there was a nationwide constitutional ban on the production, importation, transportation and sale of alcoholic beverages that we call Prohibition.

In 1933 the 18th Amendment was replaced with the 21st Amendment which allowed the production and sale of alcoholic beverages. However, by this time many of the existing producers had gone out of business and many vineyards were ripped out and replaced with cash producing crops.

Post Prohibition, states were busy trying to figure out how to regulate alcohol, how to tax alcohol and developed the Three-tier alcohol distribution system. This required producers to sell to distributors who then sold to retailers who then sold to consumers. This system is still in place and strictly enforced.

Now, what does this have to do with the price of wine?

Well in the Three-tier system everyone wants a piece of the pie.

Suppose a winemaker sells a $10 bottle to a distributor.

Well, the distributor wants to make some cash so they sell the wine to a retailer for $20 or 50% margin.

The retailer wants to make some bucks so they sell it to the consumer for 50% margin or $40. If that retailer is a restaurant, then they may mark up the wine to $60-$80.

But to understand the whole story, we need to understand how that $10 bottle was first produced. In winemaking, there are material costs such as grapes, bottles, corks, capsules and labels that all go into the Cost of Good. There is also rent, labor, taxes, and insurance. And our poor winemaker needs to make a few bucks himself.

So figure the winemaker wants to keep $5 of the $10 bottle for profit. He also has to pay about $1.5 for bottle, cork, capsule, and label. Then you have to take out all of the other expenses like labor and rent. Working backward that means that the grapes/wine only costs about $2, but you bought it for $40 minimum.

In many states such as California, producers are allowed to sell directly to the consumer which cuts out two middlemen, the distributor and the retailer and a whole lot of markup. This allows Koi Zen Cellars to sell a much higher quality product (5X) at the same price. So support your local producers and not the large retailers if you want to get a high-quality product at a fair price.